Resveratrol is one of the most discussed supplements on health message boards such as Longecity at Imminst.org. There is a wealth of information in a giant thread entitled the “500 club.” Users chime in about benefits and side effects experienced as well as how much they take daily. You’ll commonly read about increased energy. This effect has been proven in mouse studies. You’ll also come across less common results like reversal of gray hair.

There is more feedback about reversal of hairs in the beard than on the scalp. Some have photographed their lower face as evidence. In one example some hairs were dark at the root and white at the tip. Although far from conclusive it seems there is substance to the claims.

So far resveratrol users that claim to have less gray on the scalp are met with scepticism. First off, it is very hard to prove because it is a noted improvement, not a dramatic reversal. There are generally 100,000 hairs on the average human head to account for. Secondly, there is no way to confirm that the resveratrol alone is solely responsible for the reversal. Let’s remember that it is a compound taken by people concerned with optimal aging and health. Any number of positive lifestyle changes may help darken the hair.

Since gray hair reversal from resveratrol hasn’t been studied or proven it isn’t a good bet to buy it based on a handful of antidotes on the internet. Some lucky folks may experience less gray hair but this should be thought of as a pleasant side effect.

Primarily resveratrol’s strength lies in prevention and treatment of a number of age-related diseases. It will certainly make you feel younger. Whether it helps you keep your youthful good looks is still up for debate.

Better Off with Hair Dye?

Rumours are circulating that L’Oréal holds a patent for gray hair reversal without dye. In the future we may be swallowing a pill to restore hair color. It’s exciting to think about, but still a long way off. If you are unhappy with your grays the best way to take care of the problem is still hair dye. 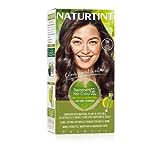 Another option is of course is to embrace your gray. Women are starting to warm up to the idea of showing off their natural color with pride instead of shame. Jamie Lee Curtis, Emmylou Harris and Meryl Streep are just a few of the mature stars inspiring women around the world.

Traditionally it was seen as un-masculine to be a slave to hair dye. All this is changing. More men are dying their hair today than in the past.